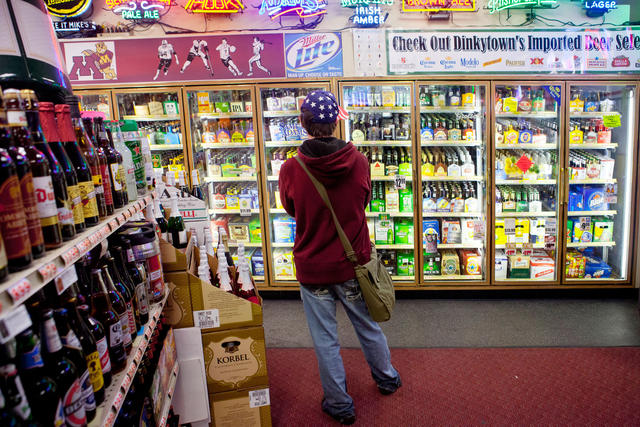 Eric Peterson deliberates over what brand of beer to buy.

As previously reported, the Walnut Creek Police Department (WCPD) has partnered up with the Center for Human Development (CHD) to plan projects aimed at reducing underage drinking in the City of Walnut Creek.

On Dec.20, WCPD conducted a minor decoy operation with funds obtained via a grant from CHD. A minor decoy operation is where a juvenile (under the direct supervision of WCPD officers) attempts to purchase alcohol at various Alcohol Beverage Control (ABC) licensed stores. If the business’ employee sells alcohol to the minor, the employee is arrested (either cited or booked) for furnishing alcohol to a minor. If the employee checks for identification and properly refuses the transaction, the store is commended for doing the right thing.

Of the twenty (20) businesses contacted this past weekend, none sold alcohol to the 19 year old minor.

Great job to all the employees for taking responsibility and doing their job correctly. Each business will be receiving a “kudos” letter from WCPD and ABC will be notified.

With winter break upon us, WCPD encourages parents to continue to discuss with their children the consequences that are associated with alcohol use and to know WCPD is making a concentrated effort to address this problem.

This article was originally posted December 26, 2014, 8:00 AM PST at http://claycord.com/2014/12/26/walnut-creek-police-release-results-of-weekend-minor-decoy-operation/

Join Us For Give Out Day!