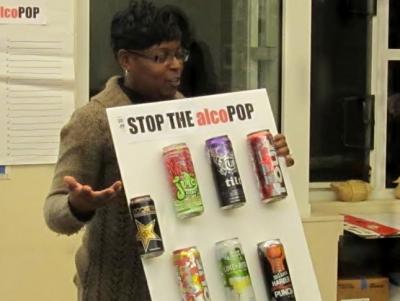 Group calls for a ban on ‘alcopops’ in Contra Costa County

PITTSBURG — Community organizers working to combat teenage alcohol consumption have called for a ban on the sale of sugary alcoholic coolers known as “alcopops,” which they say can encourage teens to drink and make it easier for them to consume alcohol.

Coordinators from chapters of the Center for Human Development, based in Antioch and Pittsburg, said at a recent town-hall meeting that popular alcohol brands like Four Loko, Buzz Balls or Mike’s Hard Lemonade make malt liquor products that are visually indistinguishable from soda or energy drink brands that teens enjoy and that alcopops are watered down with sweet flavors, making them preferable to kids over beer or hard liquor.

CHD Project Coordinator Cherice Gilliam on Dec. 10 presented a chart glued with several empty alcopop cans and one nonalcoholic beverage and challenged the audience to pick which was the nonalcoholic one. After one wrong guess and some moments of silence, someone in the audience picked it out.

“When we stop having young people drink, then what happens to alcoholic beverage companies?” said Gilliam. “Well, they’ll start catering back to adults versus catering to kids.”

Ed Diokno, a policy analyst for Supervisor Federal Glover, said the county Board of Supervisors was set to approve an ordinance on Tuesday that would place greater restrictions on the ways liquor stores can advertise alcopops and where shop owners can place them in stores. The ordinance would also call for the state Legislature to ban the sale of alcopops across California.
Advertisement

In a slideshow, Gilliam and CHD Coordinator Teri Lynn Lowery presented results from a Mt. Diablo Unified School District student survey taken from 2008 through 2010, where more than 12 percent of seventh-graders admitted to drinking at least once or twice in the past month, and the numbers increased incrementally with age. More than 20 percent of 11th-graders reported having consumed alcohol at least once in the past month.

More than 6 percent of 11th-graders said they had been drinking 10 to 19 times a month, and about 2 to 4 percent of teens in seventh, ninth and 11th grade said they drank every day. In general, consumption numbers were higher for girls than boys, and students attending nontraditional schools, like continuation schools, tended to report drinking at a higher rate.

“What these statistics show me is that young people are able to find alcohol,” Lowery said.

Lowery and Gilliam presented results of studies that show a correlation between heavy alcohol use during adolescence and developing alcoholism as an adult.

“Alcohol is the drug of choice among American adolescents and is used by more young people than tobacco and illicit drugs,” Gilliam said. “Pretty amazing, pretty devastating and can really destroy lives.”

“We know that when there’s a high number of outlets within a certain area … there are a lot of other issues going on,” Miramontes said. “Alcohol-related car crashes, violent crimes, nonviolent crimes. It’s endless.”

This article was originally posted by the Contra Costa Times at http://www.contracostatimes.com/News/ci_27130389/Group-calls-for-a-ban-on-alcopops-in-Contra-Costa-County